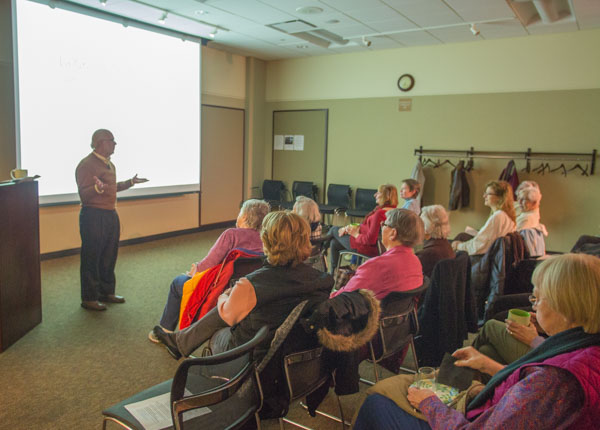 The La Grange Area Historical Society was asked by the Library to help commemorate the quilt’s re-installation. LGAHS member John Burns researched the Society’s and Library’s archives and interviewed LAGHS members to prepare a presentation on the quilt’s history.

Attendees learned that the quilt was originally planned and crafted by 27 local women who contributed over 1200 hours to the quilt’s creation. The quilt was completed just in time to be part of the 1979 La Grange Pet Parade. It was presented as part of the La Grange Centennial celebration on June 11, 1979.

After being displayed for many years in the Village Library, it was removed and placed in storage while the new, current library building was built. The Library then conducted fundraisers so the quilt could be restored, rehung and encased in plexiglass. It is now on permanent display on the garden level of the library.

Two local homes featured on the quilt were designed by well known Architect Frank Lloyd Wright. The W. Irving Clark house at 211 S. La Grange has a Victorian look as it was one of his first designs. The Stephen M. B. Hunt house at 345 S. Seventh, also designed by Wright is in his later, classic Prairie style.

Stop in the Library and enjoy this wonderful exhibit of local heritage and craftsmanship. Its one of a very special kind!